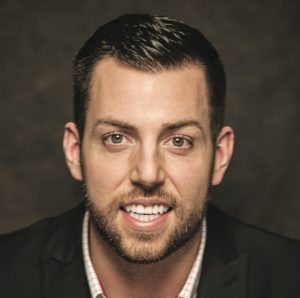 John Gadd has been setting the print world on fire since purchasing Hotcards, a Cleveland-based printer, in 2012. He and his team made big operational changes to the struggling company and infused the business with a creative company culture. The Hotcards CEO got his start right out of high school, making cold calls for Graphco, a commercial print and finishing equipment distributor also located in Cleveland. “I’d make 250 calls a day,” Gadd related. “Eventually, my boss fired the sales rep in the Northern Ohio territory and handed me the keys to the company … van. Yes, it was a van.” He

went on to sell everything from numbering machines priced at $5,000 to multimillion-dollar offset presses. Approximately four years later, Gadd channeled his entrepreneurial spirit and launched his first start-up, flozio.com, creating software for the printing industry. After exiting that company in 2011, and a brief stint consulting for a Fortune 300, Gadd moved into his current role.

Why he loves the industry: Print is incredibly ubiquitous in our daily lives. It amazes me how many things are printed — and how many people take that for granted. Not in a negative way; they just don’t realize print is literally all around them —and in many cases — serving a powerfully important role in their health, wellness, career, leisure, family and every other aspect of their lives. I’m proud to be a contributor to an industry that impacts so many, in so many ways. Even more, I’m proud to be working with a group of people transforming how print is purchased, which is predominantly moving online.

Age roadblocks and advantages: Truthfully, I’ve never had a challenge with my age other than not being old enough to rent a car on my first big sales trip with a customer. The advantages are numerous: energy (lots of it); ability to think outside the box vs. being constrained by a career of closed-minded thinking; flexibility to take enormous risks; technology being second-nature; and more.

His biggest career influence: Still to this day, my first boss, Chris Manley, the owner of Graphco, has been my largest industry influence. Not only did he get me into the industry, he taught me the most important skill I possess as an entrepreneur: sales. He was masterful in his own right and mentored me in a very impactful way. I still rely on a great deal of his training.

His most meaningful business accomplishment: Above all else, it’s been assembling and leading a team of wildly smart, talented and effective innovators and executers. Looking at Hotcards, in particular, we have an incredibly lean team that’s not only built technology as good as (if not better) than our billion-dollar-plus competitors, but also found a way to manage tens of thousands of orders with impressive accuracy on a regular basis. We’ve done all of this through a very strong and well-defined culture where we live by a set of 18 core behaviors.

His differentiating factor: Oftentimes, your “legacy printers” look at Hotcards as that formidable opponent. Yet, as cutting-edge as we may be in our business model and marketing approach, we know there are tons of competitors out there trying to eat our lunch every day. We stay extremely hungry and humble … to ensure complacency never lands us in that legacy printer bucket. We’re constantly developing new technology, launching new products and finding new ways to create a more addictive ordering experience for our customers.

What he does for fun: Work. And cycle, travel, read, seek new experiences and spend time building relationships.

(The following profile appeared in Print+Promo’s “Rise Up” cover story in the February 2017 issue.)