MARIETTA, GA — November 3, 2015 — Since the RMGT (Ryobi MHI Graphic Technology) Atlanta Demonstration Center opened to the North American Printing Industry in October of 2013, over 100 North American printers have experienced live VIP demonstrations of the most sought after print technology from RMGT, the world leader in LED UV curing and pressroom automation.  Fully automated RMGT 9 Series 8-Up presses have been the platform for live demonstrations of the industry leading Smart RPC (Simultaneous Plate Changing) Technology, Smart Insta.Color make-ready automation and RMGT/Panasonic’s G3 LED UV Curing Technology. Graphic Systems North America (GSNA), the Authorized Distributor for RMGT offset presses in North America, also announces that a number of additional Demonstration Centers will be opening throughout the U.S. during 2016.

Until the recent announcement by another company also based in Georgia, the Atlanta RMGT Demonstration Center had been the only major press 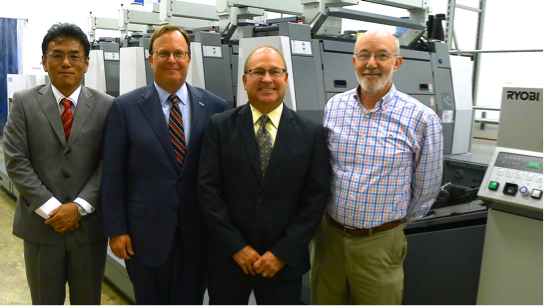 manufacturer in North America showcasing LED UV curing live and on press. This recent endorsement of RMGT’s nearly 8 year commitment to providing the lowest energy cost and most consistent UV curing in the industry comes on the heals of the 100th live RMGT VIP demonstration just last week. “We are excited to see the other major press manufacturers coming around,” states Kozac Takata, Manager of International Sales and Marketing, RMGT. “The high level of acceptance in North America follows our experience world wide with over 200 LED UV equipped RMGT presses in operation every day.” To learn more about RMGT and our G3 LED UV Curing Technology go to http://bitly.com/LED-UV.

“Our go to market strategy continues to be getting closer to our customers. We’ve learned that once a printing firm’s owner sees what RMGT brings to the table the natural next step is investment so we will continue to bring our technology closer and closer to our customers.” states Chris Manley of Graphco, RMGT’s Midwest Distributor.  “Whether that technology presentation takes place at major trade shows like Graph Expo, at our very successful Open House Events or at live VIP demonstrations which will shortly take place regionally, RMGT remains committed to the North American Print Market.”

“Seeing is believing with LED UV,” states Takata. “Our customers worldwide have learned that the question is not whether RMGT’s well-evolved LED UV technology is ready but instead whether they are ready for all the production, quality and cost advantages LED UV brings to any pressroom.”  A case in point is Paducah Printing’s owner Bruce Shulman, who came to the very first RMGT Open House in October of 2013.  Bruce was able to learn about the RMGT press and Panasonic’s G3 LED UV curing technology during that event. Next month, Paducah Printing’s 138-year-old pressroom will become the home of a new RMGT 9 Series press with in-line coating and Panasonic’s G3 High Power LED UV curing technology. This makes Paducah Printing the first Kentucky printer to offer their customers access to the latest in print technology and quality.

“We would like to thank the North American print community for the outstanding support we have received thus far and we plan to repay their Commit to Print outlook by bringing RMGT’s industry leading technology closer than ever.” Adds Chris Manley of Graphco. “Our regional approach is only possible with the heightened demand for RMGT presses and we look forward to sharing our message throughout North America.”

About Graphic Systems North America (GSNA)
GSNA is the largest independent source of printing equipment, technical service and parts in North America. GSNA delivers exclusive access to RMGT’s full line of offset and digital presses for commercial, packaging and in-plant printers in the U.S. and Canada, together with immediate technical support and parts fulfillment. Formed in July 2013 with co-headquarters in four U.S. states and two Canadian provinces, the GSNA group has more than $60 million in revenue and constitutes the single largest offset press sales and service team in North America. Learn more about GSNA at www.Ryobimhi.com