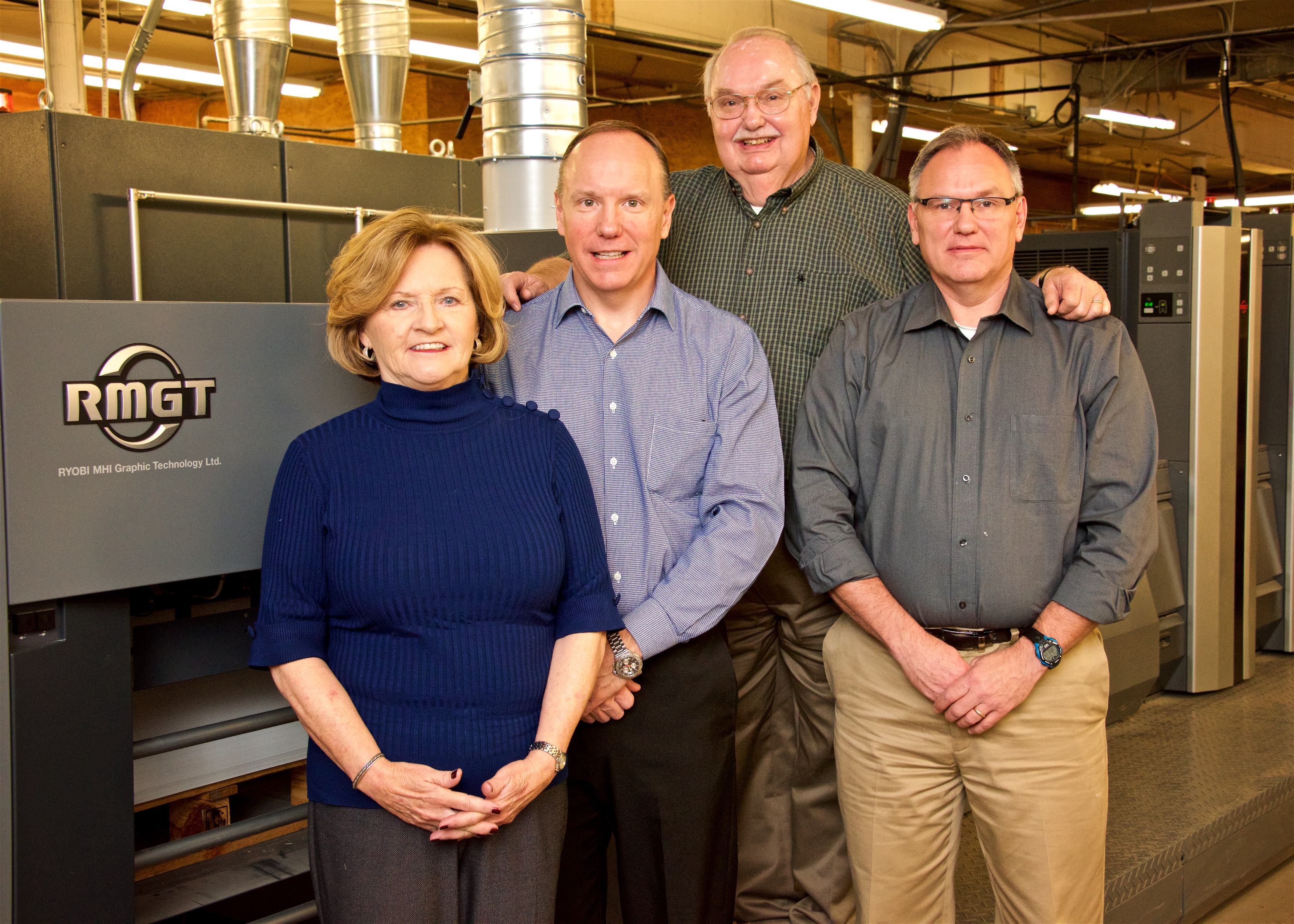 The family-owned business invests in its future and reaps rewards quickly.

INDIANAPOLIS, IN – The Moeller family got into the print business in 1931, when the patriarch of the family, who was an engraver, photographer, and printer by trade, decided to open his own business. Today, there are three generations of Moellers running Moeller Printing — David Moeller Sr., the son of the original founder, David Moeller Jr., and Chuck Moeller. Printing runs in their blood, with extended family also involved in the industry in a variety of capacities, with one exception — one relative decided to be a teacher, and they joke that she’s the “black sheep” of the family.

The operation that ran out of a garage until the early 1970s, running a 29-inch press, has come a long way over the years. Just recently, they decided to upgrade their 15-year-old offset press with an RMGT 9 Series Press. When they first started operations, they focused on products like handbills for farm sales and hardware stores. Today, they primarily focus on marketing materials of all types for highly demanding customers in the services, industrial and the educational markets.

When they set out to buy a new press, RMGT wasn’t on their radar. Their previous press was a Komori, and they knew the local KBA dealer, so they had no plans to look at anything beyond those two brands. But, noted David Jr., Diana Griffith, the RMGT sales representative from Graphco, asked the company to hold off on signing the contract for one more day, and give her the opportunity to demonstrate what she could do for them.

“Said it was a waste of time, but she asked so we decided one day couldn’t hurt anything,” said David Moeller, Jr. “And Wednesday afternoon we signed a contract with her. Our other dealers weren’t happy with us.”

“When they shared what the RMGT press could do, the quality and speed, it just made perfect sense,” said Chuck Moeller. “It brought size and automation to the table that the KBA we were considering just didn’t offer.”  Bringing a highly automated 8-up solution to the table in a footprint and price point that closely matched the 6-up offer from the competition became an obvious choice for Moeller Printing.

The RMGT 9 at Moeller Printing has been up and running for about five weeks now, taking delivery just after Thanksgiving 2016, and they are amazed at how much new business and production capacity it has opened up for their shop. The 8-up format allows them to produce double the signatures on a page than their previous press could handle, and the new press is much faster in both SPH and make-ready time, so Moeller Printing has more than doubled their capacity through this single investment.

“We have one client, a magazine, that it cut the production in half, if not more,” said David Moeller, Sr. “Between the larger size and the automation we didn’t have on the old press, we were able to complete a job that took us 24 hours to print before, and complete it in just 7.5 hours on the RMGT press. It is just remarkable. On this kind of work it has, in essence, tripled our capacity.”

And while servicing current clients faster and more profitably is a big deal, the new press has also allowed Moeller Printing to open up new markets they didn’t have a hope of competing in previously. “One of our goals was to open up new markets,” noted David Moeller, Sr. “And we just took on our first packaging project. The size and quality of our old press just wasn’t a fit for packaging, so we couldn’t have won this job without the RMGT 9 Series press.”

On the horizon for Moeller Printing are upgrades to other parts of the operation, such as the bindery, where the speeds of the new press could quickly create bottlenecks in finishing, especially as they win more packaging work going forward.

Eventually, the Moellers hope to expand business enough to require a second RMGT press in the future. For now, they decided to forego the LED-UV feature, since they don’t currently need the capability, but they were pleased to know that should the need arise that it’s an easy add-on later. “It is a great feeling to know we have options if we need them,” said Chuck Moeller. “There is a lot of flexibility with this press already so adding LED UV could make sense in the near future.”

And their relationship with Graphco has exceed their expectations as well. “The way they handled the installation, their efficiency, their support — it has been a really good situation all around,” said David Moeller, Jr. “It could not have gone any smoother. We operate out of a 10,000 square-foot facility, so to handle this kind of installation and keep the rest of our production up and running was a huge undertaking. And they were absolutely flawless.”

“We are incredibly honored to be part of the Moeller Printing story,” said Chris Manley, President, Graphco, which is the Midwest distributor for RMGT and a founding member of the Graphic Systems North America (GSNA). “This is the second investment Moeller has made with Graphco and they are a fantastic company, with amazing people.  We are pleased that we can help them grow with our best in class equipment. As they continue to evolve and expand their operations, we look forward to being their partner every step of the way.”