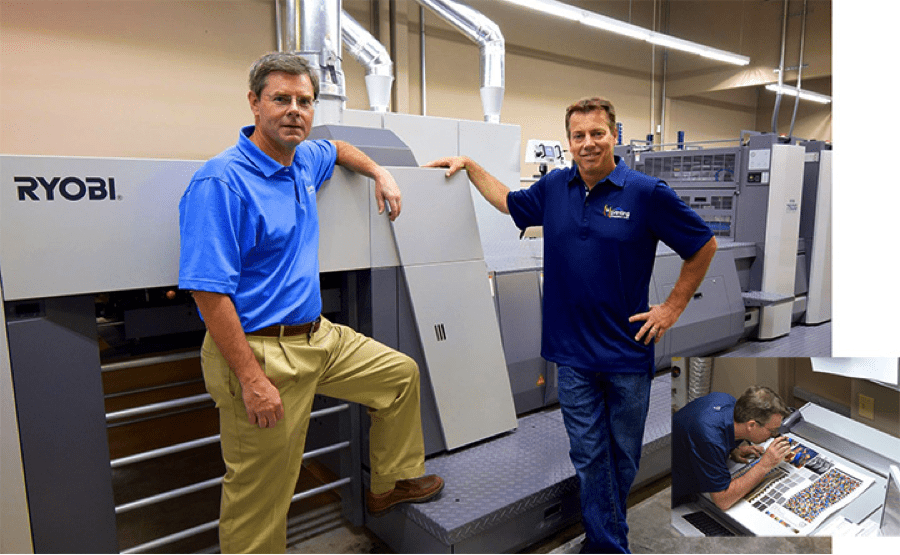 “My partner Wayne Welkner and I saw the RYOBI MHI press at GRAPH EXPO last year and fell in love with it,” recalled Jim Ferguson, co-owner and VP of J&J Printing, which is a former Kwik Kopy franchise. “We needed to upgrade our equipment and, originally, thought we’d have to buy a used press because that’s what our budget dictated,” he explains. However, that was before Graphco encouraged Ferguson and Welkner to take a hard look at the total cost of ownership (TCO) of purchasing a new RYOBI MHI press.

Affordable ownership and a new niche
“We did our research, saw the benefits and decided that we have to make this jump,” Ferguson continued, adding that J&J Printing is shifting from DI technology to Ryobi Smart Insta.Color as they replace a five-color 14×20 DI and two 12X18” DI presses with their new Ryobi MHI 754XLG in their 12,000-square-foot plant. Between the much faster make-ready times, three-up (11×17) gang runs and reduced payroll hours, J&J Printing management estimates a return on investment (ROI) in a few short years. “We anticipate a significant cost-of-goods reduction as well,” Ferguson noted, as there will be lower paper and plate costs on higher-page-count jobs when compared to running two-up on the DI presses. “And we can now compete on larger format jobs that weren’t available to us in the past.”

Ferguson added that he and Welkner believe that LED-UV is “the wave of the future.” Eliminating powder in the pressroom and being more energy-efficient are additional benefits from an environmental standpoint. He concluded, “Going right to finishing, after instant curing, is quite an interesting proposition.”

But why spend more for the Packaging Edition version of the Ryobi MHI 750XLG? That was a question that J&J Printing debated internally. “Ultimately, we decided that the added profitability of printing on thicker substrates, synthetics and plastics will make it worthwhile,” Ferguson said. “We’ve been searching for a new niche for the past few years and think short-run, boutique packaging will be it. We have a number of sales people who have sold packaging in the past and they will be hitting the streets with this new capability in the coming weeks.”

About Graphco
Graphco is the industry’s leading provider of offset, digital and print finishing solutions. It proudly imports the RYOBI MHI line of new offset printing presses featuring LED-UV curing technology and Insta-Color automated makeready. Its popular Packaging Edition presses and all RYOBI MHI presses offer best-in-class reliability and durability. These brands are only as good as the value-added and technical support team that stands behind them. Graphco’s reputation for top-notch service is second to none. Since 1976, Graphco has thrived in an ever-changing market place by loyally adhering to the firm’s original model for success: providing best-in-class print production equipment along with reliable and assured technical service.