Article taken from The Huntley Express in the UK – Friday, August 4, 2017 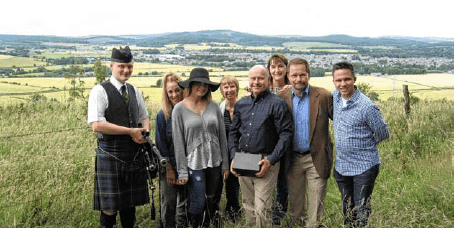 Members of the Gordon Family at the Bahill with piper Cameron Dean, where they scattered the ashes of Derek Gordon.

A MAN who grew up in Huntly and who enjoyed the long summer holidays playing in the Bahill has had his ashes scattered in his favourite spot by his family.

Derek Watt Gordon was born in 1921 and spent his early years in the town before settling in America. Last Sunday, two of his four sons and members of the extended family made their way to a spot high above the town, where he had previously told them he played and picked brambles, to fulfil the wish he expressed during a visit in 1970.

Derek Watt Gordon was born in 1921 and as a youngster he attended Huntly Parish Church and was a member of the Boys Brigade. After leaving The Gordon Schools he went to work with Mellis in their grocery shop.

He was a member of the Home Guard during the early years of World War Two and when he was old enough he joined the RAF. At the end of the war he returned to Huntly but soon afterwards made the decision to emigrate to America, settling in Chicago where members of his mother’s family, were already established.

Just three months after arriving in America he met a young woman from Glasgow whom he later married. Initially he continued in his trade as a grocer but ultimately went to work for his uncle John Watt, also from Huntly, and served his apprenticeship as a plasterer.

His work can be seen in many of Chicago’s most prominent buildings and he even was commissioned by Frank Lloyd Wright, the noted American architect.

However, he never forgot his roots in Huntly and his childhood spent in a third floor flat at 40 Gordon Street. In 1970, he brought his wife and four sons to Scotland.

His son John said: “I was ten at the time and we spent many days fishing the Bogie and Deveron rivers and hiking up the Clashmach, Battlehill and Bahill. At the Bahill we always stopped at an old iron bench and looked back to Huntly. He was able to point out the kitchen windows of the house where he had been brought up and it was then that he told us that when he died he wanted to be cremated and his ashes brought back to Scotland and cast about on the Bahill.

“I remember at the time not knowing how to respond but the seeds had been planted and I never forgot that conversation. Over the years when I came back to Huntly with him, including for Gordon 2000, the millennium event, I was able to confirm his wishes.

“He certainly picked a great spot, it is beautiful up here and so typical of Scottish scenery.”

It was only during his father’s final days in May 2016 that Mr Gordon became aware of the writing of one of Huntly’s most famous sons, the writer and poet George MacDonald who was brought up at the foot of the Bahill. Mr Gordon was able to read MacDonald’s poem, The Hills, to his father and he believes it brought him much comfort, bearing great similarity to his father’s childhood adventures on the Bahill.

Last Sunday afternoon, at an informal ceremony piper Conner Dean played Highland Cathedral and Amazing Grace and an extract from the poem was read before John, his brother Derek, their wives, Donna and Lisa, grandchildren Jianna and Blake and a cousin Rosemary took it in turns to scatter the ashes in the area where Derek had spent his childhood.