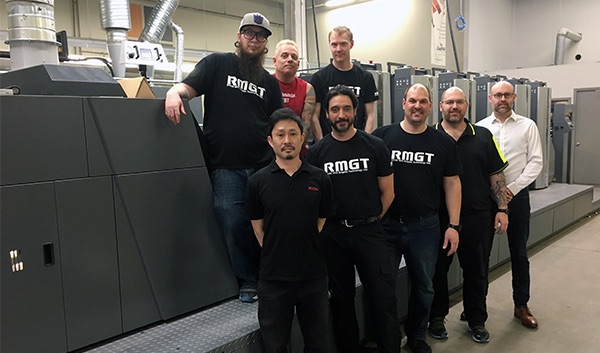 The LED UV curing has “already saved our bacon several times,” said Todd. “We have literally taken a job off the press and immediately started cutting and putting it into bindery. Normally we would have had to wait half a day — or even overnight — to touch those jobs.”

In addition to turning jobs around much faster, LED UV instant ink curing has provided the ability to print without heat, odor or spray powder.

The extensive decision making process to purchase the RMGT 9 Series press was well evaluated; Todd wanted to be sure it was the right fit for his business. “When I started looking at presses, I’ll be honest, I was looking at staying in the mid-sized sheet range,” he noted, explaining that he swore he would never invest in a full size, 40-inch press. “We’ve been a successful mid-size sheet printer since day one, but this press was very unique. And when we started really looking at the numbers, no supplier other than RMGT had a machine in North America that could compete with that size and price range.” 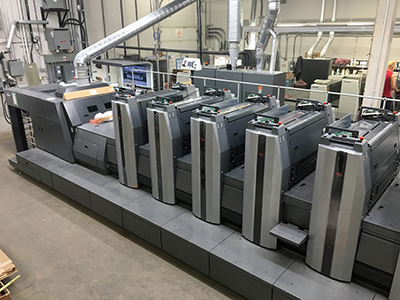 The RMGT 9 Series press, Todd said, allows the shop to compete on most of the work that would usually require a 40-inch press, without actually having to invest the money or the space in such equipment. He noted that the shop has already been able to produce work in-house that they previously would have either not bid on at all, or would have outsourced to one of their competitors in the market. Previously, Capital Colour ran a maximum sheet size of 20 x 28” and now, with their RMGT 9 Series press, they are capable of printing on a maximum sheet size of 25 x 36” — a significant advantage since this permits them more multiple ups on a single sheet than on their former equipment. Capital Colour was able to replace their two half size presses with the one 8-up RMGT 9 Series offset press.

The continued efforts to adapt to the market and make strategic investments to stay ahead of the competition has always been important for Capital Colour. With the goal of opening up even more markets, the next step for them is to continue testing and running non-traditional substrates like synthetics and plastics through the RMGT 9 Series press. “We’re focused on meeting our customer needs, and we will continue to invest and readjust to remain a viable business going forward,” Todd said.

Capital Colour’s business was founded on adaptability and continues to make this a priority to this day, and the purchase of the RMGT 9 Series press fits perfectly. Founded in 1979 as a small graphic design and prepress shop, Capital Colour originally did not have a single press of their own. Fred Neuschmid, the company’s founder did however have a background in printing, and when he saw that the days of dedicated prepress service bureaus were nearing its end, purchased the company’s first press, and never looked back. Seven years ago, Neuschmid was ready to retire, and Todd, who actually started with the company nearly 20 years ago as an account representative, and his wife Bonnie Todd, made the decision to invest. “I had too much care and respect for the team to see it go to an outsider,” he said.
KBR Graphics, a founding member of Graphic Systems North America, is the exclusive Canadian distributor of RMGT presses. “This has been an amazing partnership for us,” said Karl Belafi Jr., Vice President of KBR Graphics, “We worked with Capital Colour for about two years, making sure we got them the exact machine, in the exact configuration, to meet their needs — both today, and where they want to go in the future. We are honored to be part of their story, and we are looking forward to continuing to serve them for many years to come.”
Posted in Latest News, Read RYOBI MHI / GSNA News